Overview: Tinythoughts is a one sentence a day journaling app available for both Android and iOS. Even though there are many journaling apps available out there, what makes tinythoughts different from them is that it lets you write a summary of your day in 280 words or less. It also gives you daily prompts and reminders to help you write better. This redesign was part of my personal project with the aim of enhancing the user experience as well as increasing app engagement.

Solution: I came up with a redesign concept for the Android app with the motive of enhancing the overall experience so that the app is more engaging. I wanted to get rid of the unnecessary clutter within the app and make it more usable for people who use it as their go to journaling app.

As a person who tries to maintain a daily journal, I have tried a lot of tools that haven’t been useful. I came to know about the app when its creator (Jess Robins) submitted it on ProductHunt. I decided to give it a shot and I was really impressed by the idea of this app. The selling point was that you write your daily journal in 280 words or less and the app actually gives you daily prompts in order to write better.

I started to use this as my daily digital journaling app because of its simplicity. After using it for a couple of days I figured out that the current experience could be improved by implementing certain changes within the app. This idea came to me after reading couple of comments on ProductHunt as well as the official app reviews. I personally wanted these changes as well so I decided to give it a shot. Here are the screenshots of the current app discussing some features along with some of the associated issues –

1. Use of navigation drawer

As you can see, the navigation drawer is used as go-to navigation for the whole app. Now a drawer navigation is good when you have at least 5-7 primary views (Gmail’s Android app is a good example for this). But in our case we only have 2 primary views – Home & Settings. Things like logout and contact support can be grouped under settings so I believe those don’t count.

Plus you have to perform an extra step in order to reach the navigation (either swipe or tapping the hamburger menu). A bottom navigation would be a good option in this case and Google also suggests using it for 3-5 primary destinations in its Material Guidelines.

While uploading an image I thought that I could upload multiple times. After uploading the first one I tapped the image icon again in order to add the second but it ended up replacing the first one. I came to know that you can only upload one image at a time. Basically no affordance was given to me to confirm whether I want to replace the current image or not!

One really awesome feature that I like is the use of sentiment analysis while writing the journal. The app can depict your mood while you are typing and comes up with these unique hashtags e.g. #positive-mood. This feature is well implemented and I really like it. Currently you can see your mood over a period of time only in the web application, so I took some cues from there and tried to implement in the redesign.

As discussed previously, options like logout and contact support can be added within the app settings itself rather than placing it in the app drawer. Another thing that I feel like is missing from the app is presence of a search bar. As people keep writing a new journal everyday, they would like to reflect on what they wrote say 6 months back by typing a specific word or keyphrase.

I went through most of the comments on ProductHunt and also saw some reviews on Google Play Store. I recognized the following pain points that came out of that analysis:

1. There should be an option to turn on/off daily prompts. Some people don’t find the prompts to be helpful and would prefer not to use them while typing their journal.

2. Some of them were facing the same image upload issue that I came across. People would like to be informed about the upload limit so that their initial upload does not get replaced with a new one.

3. They would like to see statistics about their past mood trends as present in the web application.

4. It would be a good option to have a search functionality within the app so that previous entry can be easily searched once the journal list starts to get longer.

Keeping in mind the current features, I went on to prioritize more features that I came across in my research. Rather than doing a major overhaul, I wanted to keep the basic features intact and iterate on making the experience better. After creating a list of additional changes and features, I went on to write user stories that would serve as the base for my redesign.

The app also needed a restructured information architecture in order to accommodate the updated features. I went through the Tinythoughts web application in order to see how its navigation differs from the mobile app navigation.

These had to be included in the app as well in order to make a consistent experience across all platforms.

I have not tried the premium features yet but I had some ideas of how these could be implemented within the mobile app. So after analyzing and ideating, I went on to make the final prototypes.

I usually begin implementing by ideas on pen and paper rather than directly going on to the screen. I feel like paper wireframes is the cheapest and least time consuming way to experiment with multiple ideas. Here is some of the clutter that I generated. 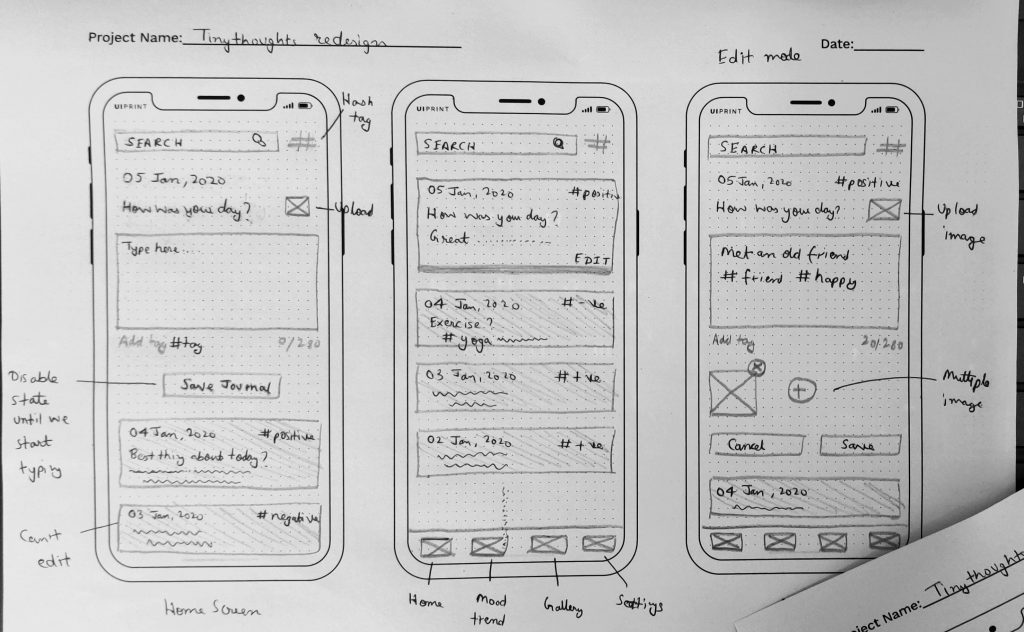 Pixel pushing time! I wanted to keep the primary color as it is because it’s currently being used on both mobile as the web application, hence adhering to the brand guidelines.

I shared a working prototype of the redesign with the creator of the app. She appreciated the fact that I took time to clean up the current design and made it more usable. I came to know that this app was started as her side project and right now is used by many people as their go to daily journaling app. She is looking to bring new updates in the future and I hope this proved to be valuable for her.

Who knows these redesigned bits might end up getting implemented in the future versions of the app! On the other hand I gained a better understanding about Google’s Material Guidelines and how to use it in order to design more consistent interfaces.